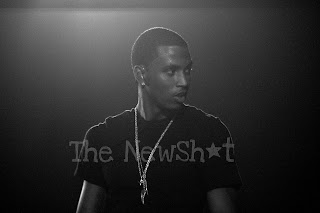 What can I say about this man.....let me give you some keywords:
Amazing Singer
Hot
Great Body
Girls Go Crazy
Sex Appeal
He's gonna be one of  the greatest! I was impressed! I've have no words left to write then just,
GO TO HIS SHOW AND SEE WHY HE MAKES YOUR PANTY DROP!!!! 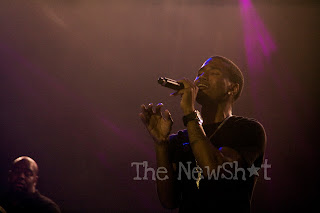 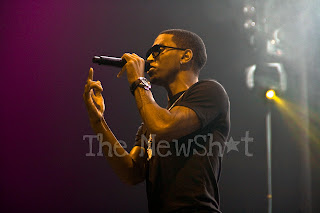 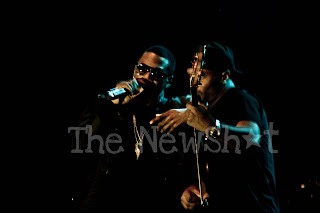 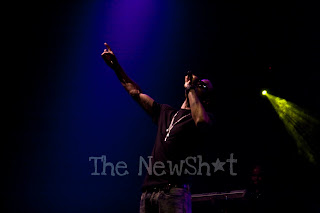 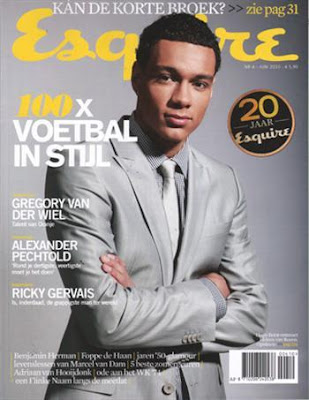 In this months Dutch Esquire issue, Mr. Gregory van der Wiel, 22 year old rightback.
He made his professional debut back in 2007 with Ajax. Besides the talent his has, which he has been rewarded for at the end of season 2008-2009 ( Talent of the year ), with a lot of hard work he became a valuable player for the Amsterdam's football club.
Since March 2009 he also participated with the National Team, what is in my opinion an honour to play with, especially when you're that young. At this right moment Gregory is gettin ready for the upcoming World Cup 2010.
So if you want to know more about this football talent, buy the new Esquire Magazine!
And to you Greg: I wish you all the best at the World Cup 2010! May you shine on that field!
Good Luck! 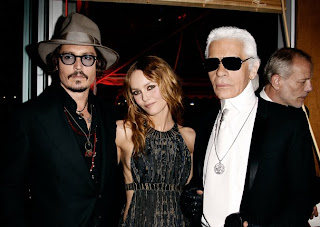 I truly love this picture! It is such a powerful one and maybe becomes of the people on it, who have in my point of view, truly one of a kind character. Something you don't see often these days, maybe not at all with this society! So why these 3 being captured?
To honour Vanessa Paradis and Karl Lagerfeld, Chanel hosted a dinner together with Canal + and Madame Figaro. They celebrated the special edition of Madame Figaro with Vanessa Paradis as editor-in-chief along with Karl Lagerfeld's photographs of the actress. 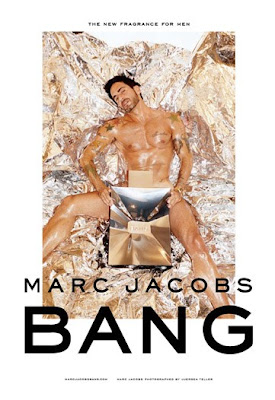 BANG and there it is, Marc Jacobs featuring in his own new frangrance for men campagne!
He wanted to show that this fragrance is his personal passion. They've tried to do the shoot with clothes on, but it was not Banging enough, so Fashion Photographer Jeurgen Teller ( the one who shot this campagne ) came up with this idea to use the silver Mylar and then everything fell in to place and BANG, they had their perfect picture!
The fragrance will be available at Bloomingdale's and Marc Jacobs stores on July 30! 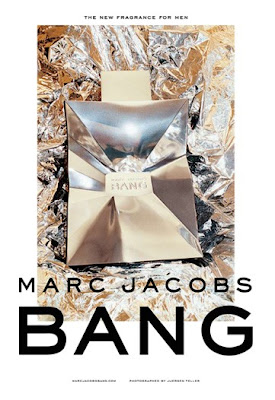 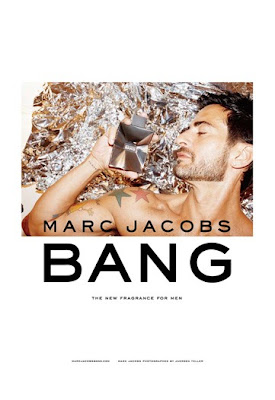 Write The Future
Nike
Since we're already in the atmosphere of football, here's the new Nike commercial ft. Drogba, Ronaldo, Rooney and Ronaldinho, for the upcoming World Cup 2010 held in South Africa.
Football is not just a game anymore, but influences a lot of people all over the world and not just Europe! 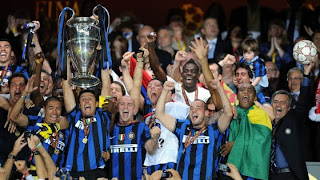 As you all may know, Soccer is a huge thing in Europe! And when it comes to the Champions League, everybody is watching the CL Final, if your team has made it or not!
This year the battle was between German team Bayern Múnchen, Louis van Gaal ( Dutch trainer ) and Italian team Internazionale, José Maurinho ( Portugese trainer )
Both trainers are well known for their accomplishments, therefore it was a very exciting match!
But in the end Internazionale won with 2-0 by Diego Milito!
So.....Congratulazioni per la tua vittoria!!!!!

at. 24.5.10 0 Messages
Email ThisBlogThis!Share to TwitterShare to FacebookShare to Pinterest
Labels: Football, Internazionale

Alicia Keys
Un-Thinkable
We have waited sooo long for this video to come out, this song has a special meaning to us!
Alicia, you write such beautiful lyrics, and this song will always be one of our favorites!
Director: Chris Robinson
Special Guest Star: Chad Michael Murray

at. 12.5.10 1 Messages
Email ThisBlogThis!Share to TwitterShare to FacebookShare to Pinterest
Labels: Alicia Keys, Music
The NewSh*T

Our nr.1  eye wear for this Summer. 2010
let's start with how i found these sunglasses...
we went for a 4 day holiday trip to Eivissa ''Ibiza"
the first thing we did while arrived on the beautiful island, was offcourse
guess what: Shopping.!
all said and done. i found this cool shop ''Revolver Ibiza''
and the first thing i spotted was the large, angular, square shaped Gold sunglasses.
and yuuuup! i felt it again butterflies so i knew these shades were made for me! 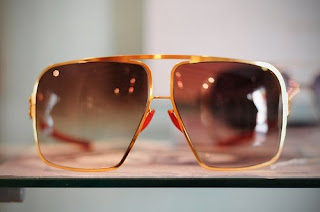 designed by SUPERFINE
for ic-berlin!
#Gold Solo
price tag. € 399.-
They are so special.. and unique they weight like a piece of paper.
The frames have no screws in the hinges and the arms fold due to the way they are cut from the sheet metal and interlock with the body of the frame.
This makes them really sturdy. Damn clever!

at. 12.5.10 0 Messages
Email ThisBlogThis!Share to TwitterShare to FacebookShare to Pinterest
Labels: Fashion 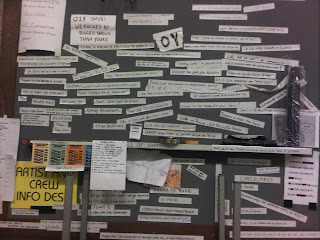 My friend had to work at a club and we bumped into this wall full of quotes.
And ofcourse I had to spam that wall too!
Sorry that it's in Dutch.....go and find yourself a translater! 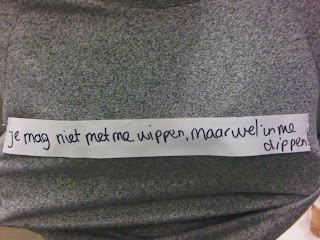 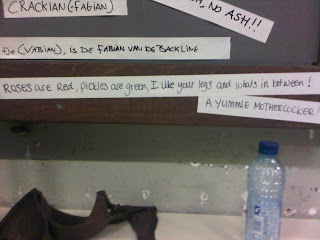 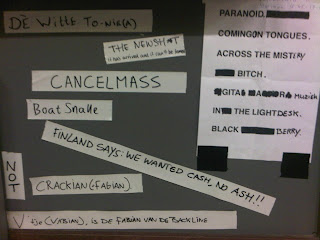 at. 7.5.10 1 Messages
Email ThisBlogThis!Share to TwitterShare to FacebookShare to Pinterest
Labels: Quotes
The NewSh*t


Accessorize Away!
Fall 2010
Even though Summer has not begun yet, you know how it goes in fashion, it is always ahead!
So let me give you some ideas for a suitable finishing touch for your already fabolous outfit, when you're laying on this beautiful beach to have this sunkissed tan!
Just to warm you up...metaphorically speaking ;)
Chanel
Calfskin Handbag 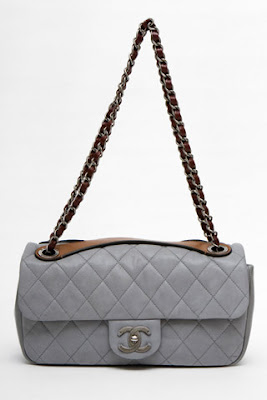 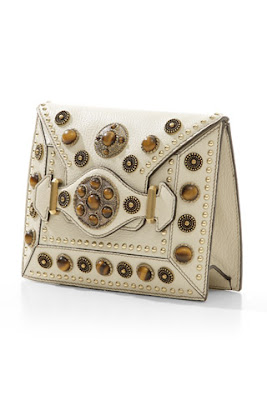 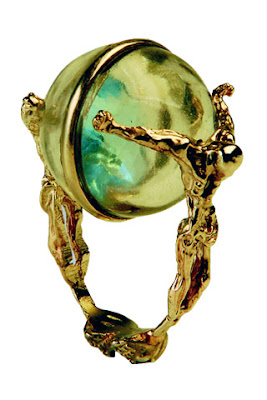 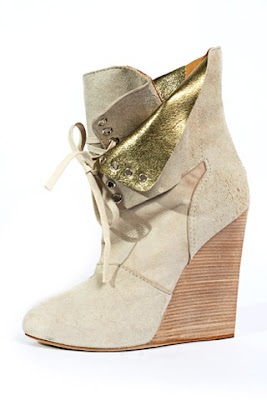 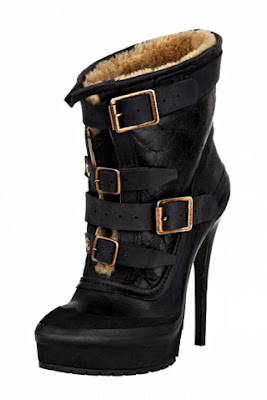 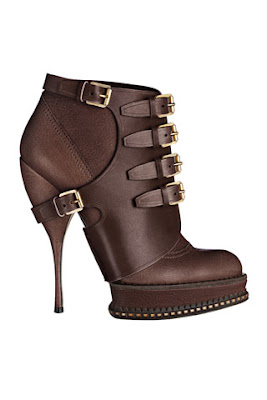 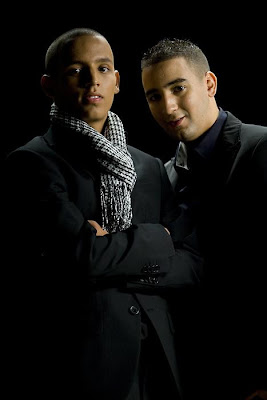 What can I say about these guys? Honoustly I'm not a big fan of their music, but these guys are truly friendly and hilarious! Never a dull moment when you hang out with these 2 guys!
Ok but serious business talk right, even though I'm not a big fan of their music, they did a great, but most of all a smart job, when they released their latest song, called Ping! For the ones that have a Blackberry, you know what Ping is, for the ones that don't and have living inside of a cave, Ping is what you use with you Blackberry Messenger to reach one of your contacts.
But enough about BB, these smartasses released their single and now they've even merchandise! And not just a random simple T-shirt, no no no......but a T-shirt with your BB scancode! So for example, you're wearing the T at a club, you bump into a nice girl/boy ( and the other person has a BB ), scan over the T with your BB and the other person has your pincode.....with as end result, you can chat all the night away!!!!
See below some vids, when Fouradi brought their T's to their friends!
So peeps get your own Ping T!!!!!!!!
And Ping all the way!
http://www.fouradi.nl/