The NewSh*T
30 Seconds To Mars

Next leg of Into the Wild Tour 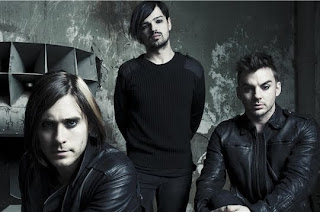 
The inspiration for the name of the tour comes from a lyric from “The Mission,” a song that Leto wrote back in 1999 that appeared on the group’s self-titled debut. “When you go out on the road, it is kind of a venture into the wild. You’re with this group of pirates, from your crew to your bandmates, and you share this insane journey around the world. It’s quite unlike anything else.”
30 Seconds to Mars have been a band for over 10 years,
but they’re just coming into their own as an elite touring force now.
On the march the 2nd they will visit our lovely city Amsterdam.
Tickets  €35  at Heineken Music Hall
Arena Boulevard 590
So Don't miss out on seeing the action live
and get your tickets right away !!

at. 16.2.10
Email ThisBlogThis!Share to TwitterShare to FacebookShare to Pinterest
Labels: Jared Leto, Music